Send us a message

Welcome to our website........and welcome to the wonderful world of eastern Canada's wild plants!

We have created this site in an attempt to foster wider knowledge and appreciation of the beauty, usefulness, preservation and propagation of a wide-ranging sample of the plants that grow naturally in eastern Canada. For each of the plant species featured here, we have put together a series of photographs that illustrate most of its seasonal and life history stages, from seed to the mature flowering and fruiting plant. To this, we have added a series of notes outlining the overall style and nature of the plant, its typical habitat, its potential for use in parks and gardens, its flowering and fruiting times, and the appearance of its fruits when ripe. We then give as much prescriptive information as possible on how to handle its fruits and seeds, from collection, through extraction, cleaning and storage, to germination protocols. This information has been gathered and collated from the work of many scientists and gardeners, and has been substantially supplemented and tested through our own "hands-on" work over the past 30 years with the plants and seeds of most of the species included on this website.

Design and contents of this site are Copyright © 2021 Kristl Walek & Graham Page. Implementation was by Paul de Bruyn.

Almost all of the photographs to be found on this site are by Graham Page and Kristl Walek. A few others have been included by kind permission of their owners. Credits for each photograph can be found in the individual species data.

Terms of Use: Any part of the information given on this site for each species, along with any of the photographs by Graham Page and Kristl Walek, may be used or reproduced free of charge for non-profit personal or institutional purposes only, provided its source is acknowledged on each occasion. All other uses are prohibited without the prior written agreement of the authors.

Disclaimer: While every effort has been made to ensure the accuracy and validity of the information provided on this website, it is important to remember that we are dealing with biological systems involving wild plants growing in both natural and man-made environments. Consequently, we cannot guarantee the outcomes of any of the procedures or treatments described; they are provided here for general informational and educational purposes only. More specifically, we do not recommend or endorse the application of information provided on this site with regard to the collection, handling, consumption, or introduction into garden settings of any of the individual species referenced here; any and all outcomes, whether expected or not, remain the exclusive responsibility of the user.

The work that has led to this website is ongoing, and we hope to be able to add further species and seed germination information from time to time. Comments on any aspect of this site are welcome at any time. We can be contacted at:wildplantsfromseed@gmail.com

We offer our sincere thanks to everyone who has helped us over the years in many ways, great and small,

to amass all the information and photographs needed for this website.

Our thanks for help, and friendship, go in particular to: David J. White, for his role in helping locate, identify, and photograph many interesting and uncommon plants, and for continuing to be an excellent guide and "steersman" in the back of the canoe; Brian Haddon, for many years of loyal support as "Head Sherpa" on photographic expeditions to "lovely" black spruce swamps (plus a few other, slightly more desirable places); and J. Peter Hall, for occasional, and willing, help on some of these same expeditions.

Many thanks also to all the private landowners who were kind enough to allow access to their properties; our photographic record would have been much diminished without their kind cooperation.

We would also like to thank friends and colleagues, employees and volunteers, who have made significant contributions over the years to the seed collection, processing, and testing activities undertaken in connection with Gardens North seed business, especially Edmund Rodrique; our thanks also to Anne Williams for her help during the initial phases of this project, and to John de Bruyn for much advice and assistance during the final implementation stages.

Finally, a gentle thanks, in fond remembrance, from one of us (GP) to my much-loved late wife, Doris, who provided so much support and encouragement, over many years, for what often seemed (and in reality actually is!) a never-ending task. 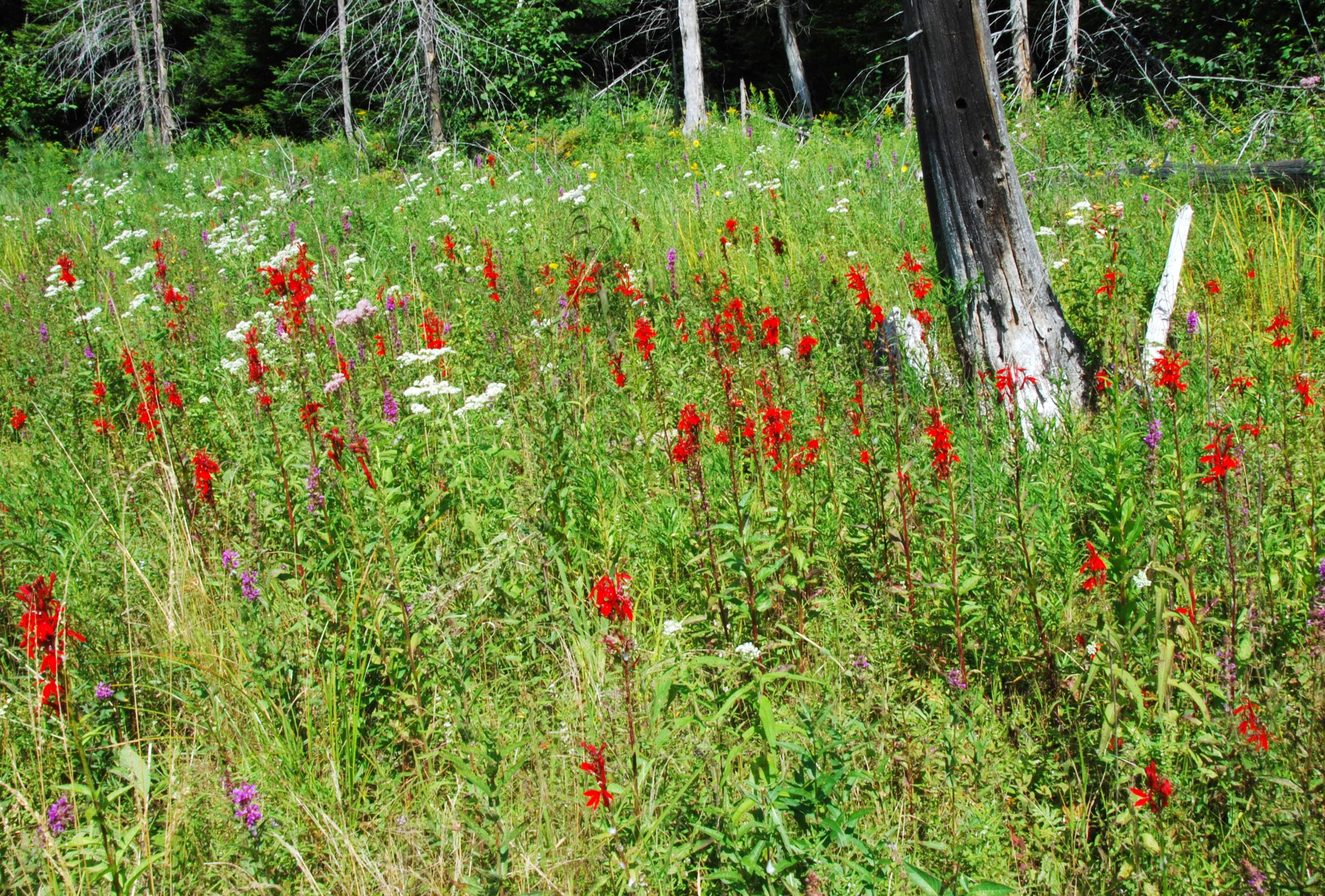 Approximately 3000 species of vascular plants have been recorded as growing wild in eastern Canada. About one-third of these are species that have been introduced into the region through human activity and which have now become naturalized (i.e. self-sustaining without further human intervention). There are some garden-worthy plants among these introduced species, but many are weedy and invasive; we have excluded all of them from this website.

From among the 2000 or so native vascular plants that occur within our area of coverage (see below for details of the area), we have selected over 600 for inclusion here. They have been selected partly on the basis of criteria such as attractiveness and/or usefulness, as well as ease of cultivation, and also partly on more subjective criteria such as personal interests and preferences, and opportunities (or lack thereof) that we may have had to observe and work with them. We have also attempted to include at least one or more representatives of all the major plant families that occur within our region, so as to cover as wide a range of flowering and fruiting mechanisms and seed germination requirements as possible.

For reasons of both biology and convenience, we have organised the selected species into a series of 9 groups, as follows:

along with Herbaceous Plants (including annual, biennial and perennial species), sub-divided into:

The species are listed alphabetically by their botanical (latin) name within the group to which they have been assigned; all botanical names have been verified against the most recently available information on the VASCAN website (see the reference list in the Guidelines and Methodology Section for a full citation for this online site). In addition, previous botanical names are given for several species whose names have been changed during the last few years. One English common name is also given for each species; however, we discourage the use of common names as much as possible because of the large degree of confusion and uncertainty that surrounds many of them (overlaps, different regional and local usages, etc.). The full array of possible English and French common names can be cross-checked against the botanical names on the VASCAN website if so desired.

Our area of geographical coverage includes all of the more southern portion of eastern Canada that falls within Canadian Plant Hardiness Zones 3 - 7 inclusive. This includes almost all of the area south of a line running approximately east and northeast from the north shore of Lake Superior to the north shore of the St. Lawrence River estuary (see map), and includes all of the major population centres of eastern Canada. In the species notes we refer to this area as "our region" or simply "E. Canada". 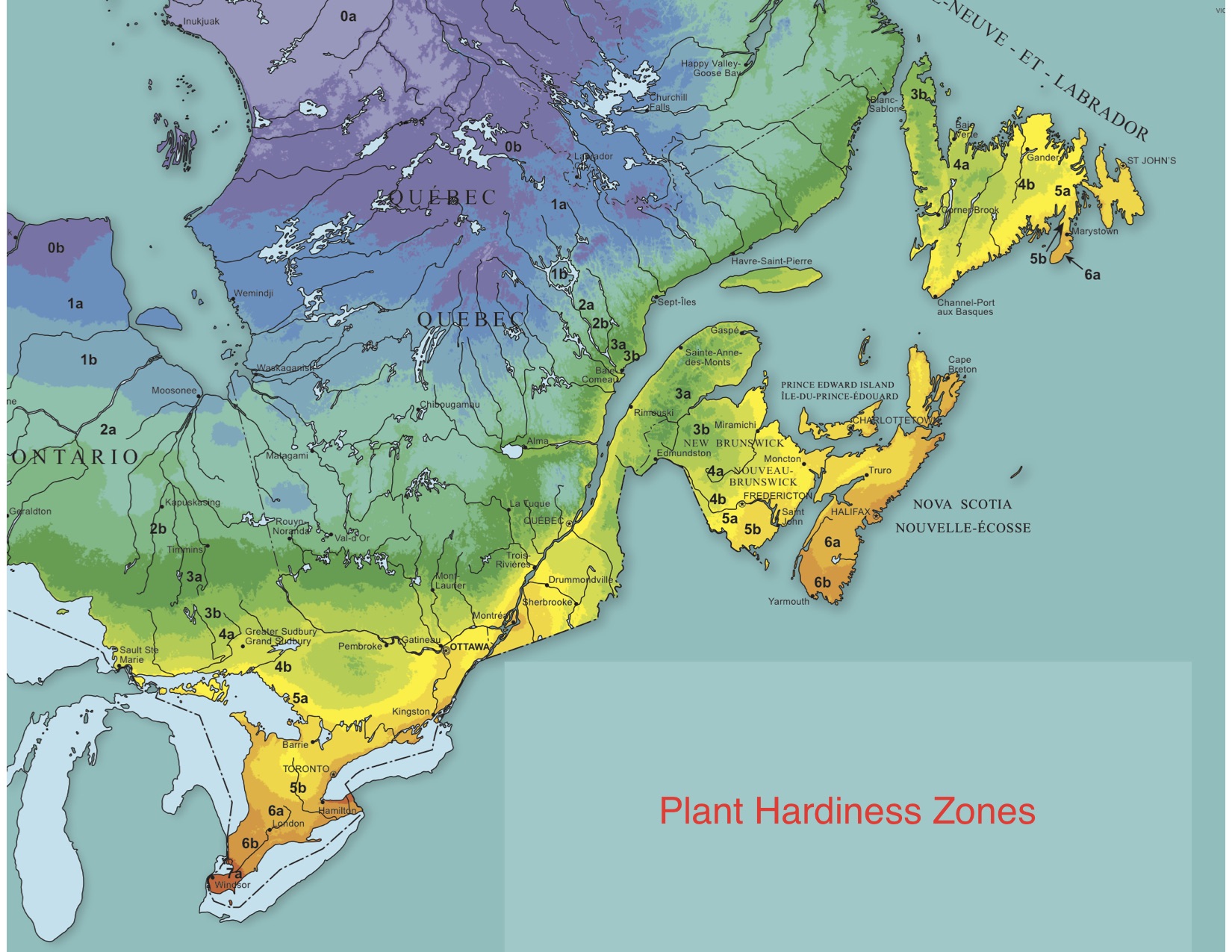 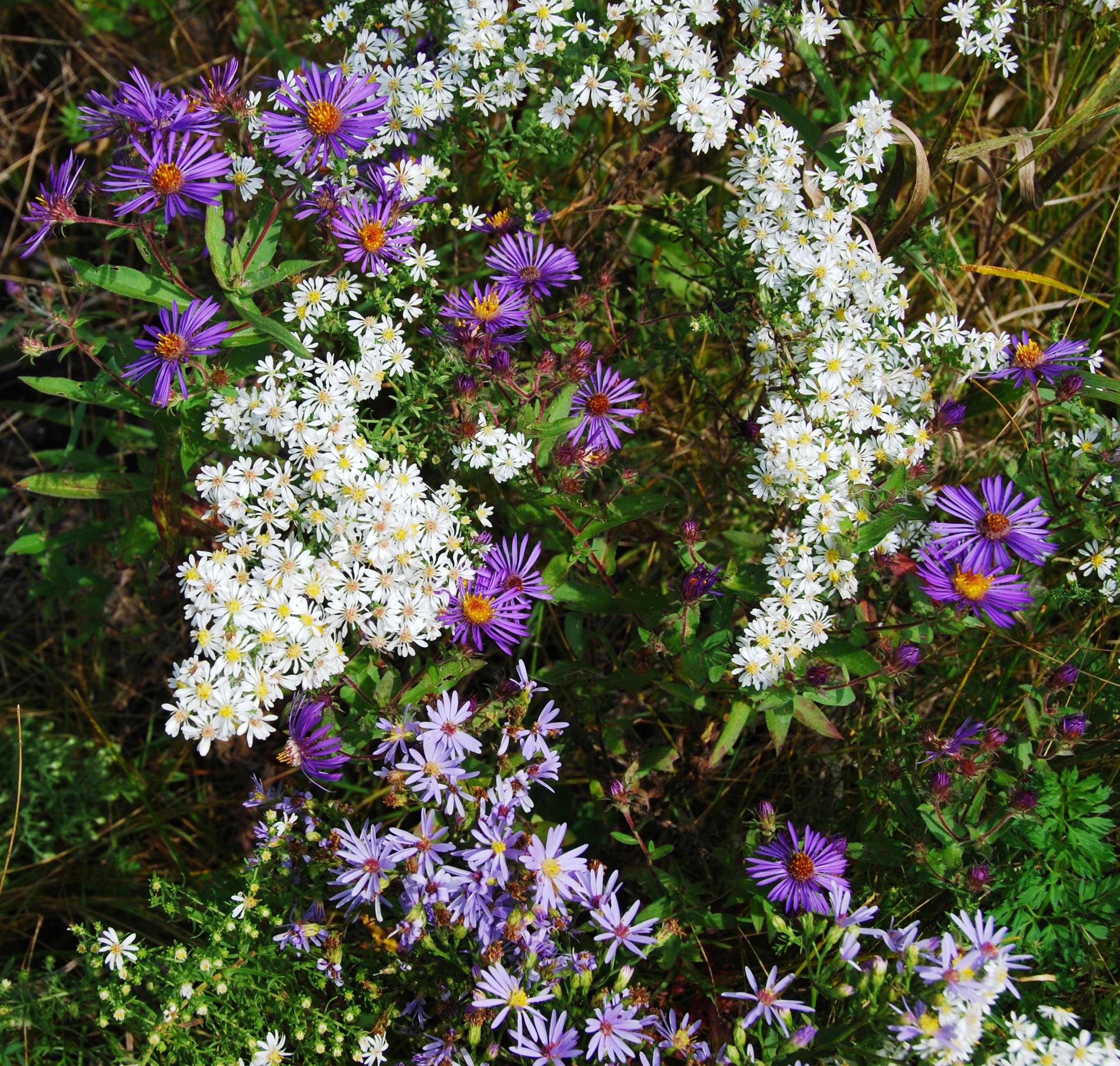 Each of the species included in this website grows in the wild somewhere within this region - in some cases (nearly) everywhere, and in some others only in one (or a few) very precise locality(ies). The large geographic and climatic range within the region means, of course, that not all the selected plants are hardy in all parts of the region; in particular, many of the species found in the wild only in Zones 6 and 7 (in southern Ontario and/or southwestern Nova Scotia) may not survive or be able to produce fruit in much of Zones 3 and 4. However, local microclimates (including the reliability of continuous winter snow cover) and amounts of added winter protection provided in a garden situation are also critical determinants of success, so some measure of trial and error is often needed (and desirable). We have, therefore, provided brief information on hardiness limits for just a few (Zone 6 and 7) tree species where this is known with some measure of reliability (based on past 'trial and error"); trees are, in general, because of their large size, the only group of plants that cannot be provided with much added protection against severe winter cold (beyond their early seedling stage) through cultural practices.

Of course, the species native to our region in eastern Canada can usually also grow well in other parts of the world with similar (or rather more benign) climatic conditions. The information we give on site preferences, and on seed handling and germination, should therefore be equally applicable under such circumstances.

It is also important to note that our region in eastern Canada does not include any of the huge, more northern part that falls within Hardiness Zones 0 - 2. This is for two key reasons: (i) while some of our selected native species do grow in the wild in Zones 0 - 2, many do not and cannot be expected to survive and grow successfully in cultivation within most or all of that area; and (ii) there is a distinct, and very different, "arctic-alpine" flora found in many parts of Zones 0 - 2, composed of species that (with a very few exceptions) are intolerant of summer heat and/or relatively high winter humidity, and that are extremely difficult or virtually impossible to grow successfully in more southern areas. We would need a second, companion, website (along with a second lifetime!) to provide an equivalent treatment for these arctic-alpine species.

The 'typical' or 'usual' flowering and fruit ripening dates given for each species are based primarily on observations in the wild and/or in cultivation at sites in eastern Ontario (Zones 4b - 5b). Where this was not possible (mainly for a few Zone 6 and 7 species), data from their natural range have been used.

The dates given are, in any case, intended as general guidelines only. In those parts of our region with colder winter temperatures and/or a cooler or delayed growing season as compared to Zone 5, the equivalent dates may be up to a few weeks later than those given. Also, throughout our region, annual variations in weather conditions, as well as local microclimate differences, can significantly affect both flowering and fruit ripening times. Local observation is always necessary.